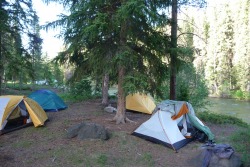 We left Hunters Ridge Camp ground  and entered the northeast gate of Yellowstone traveling all the way south through Yellowstone with a stop at "Old Faithful." From there we rode south out of Yellowstone towards the Tetons. 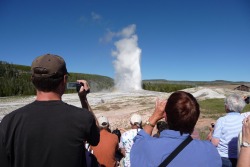 Yellowstone National Park - We all enjoyed the blast from Old Faith. It was about 10 minutes late, but everyone cheered when it started shooting hot water and steam skyward.

We camped at Lizard Creek campground near the Grand Teton National Park. The location of our camp was next to the Clarks Fork of the Shoshone River.
Later we bid farewell to Mark & Jacob as they returned to Colorado Springs. Lee & Darrel continued west and headed to White Sulfur Springs for the their next campground. 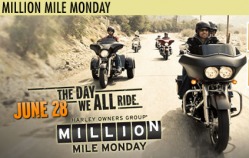 We will be riding on Million Mile Monday, June 28, 2010. What's it all about? Check out this video on YouTube. Click Here 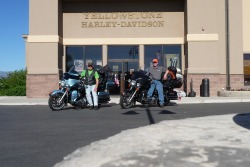 Yellowstone Harley is in Belgrade, MT, which is just outside the northwest gate of Yellowstone. 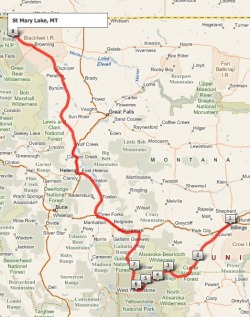 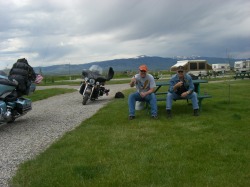 The ride to White Sulfur Springs took us through rolling hills and green hillsides. It's a ride the truly reminded us that Montana is the home of "Big Sky."  We camped at a very nice campground just on the edge of Sulfur Springs called Conestoga Campground. This is the only campground in the area.  It was the first hot shower in three days! That was a blessing not only to us, but the people around us! In this picture we had just packed up and ready to ride. 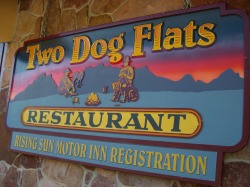 We camped at Sunrise Campground at the east end of Glacier National Park on "Going to the Sun Road". We arrived at 7:30 PM and setup camp in a light rain. We rode a quarter of a mile to the 'Two Dog Flats" restaurant for a late dinner. The next morning was cloudy, but no rain! Before heading up the "Going to the Sun Road" to Logan Pass we had our breakfast at the same restaurant. The food was excellent.
The Sunrise Visitor Center is open daily from early July to early September and closed in winter. Here visitors will find exhibits, guided interpretive programs, book sales, and a picnic area. 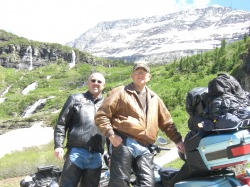 The ride through Logan pass was unbelievably beautiful at 6646 feet altitude. Narrow valleys with rushing streams becoming rushing rivers! Smaller streams of water were coming down from the mountains at every turn. This water made it's way to some large lakes including St Mary's Lake.
The mountains seem to go straight up from the roadway. A number of locations showed evidence of snow avalanches that wiped the mountain side clean of all trees.
Road construction slowed us down for about 15 minutes as we rode through the pass. At the Logan Pass Visitor Center we walked out on snow. Logan Pass opened on June 25, 2010, for visitors. The snow was still 10-20 feet deep at that altitude. Most peaks were still covered in snow. See the pictures below. Click on the picture to "Enlarge" for better viewing.
On we camped just inside the west entrance to Glacier National Park at Spraque Creek Campground after our ride through Glacier National Park. 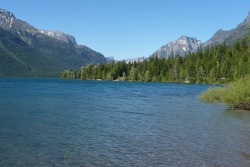 On we camped just inside the west entrance to Glacier National Park at Spraque Creek Campground after riding from White Sulfur Springs to Glacier. Spraque Creek is located next to Lake McDonald. 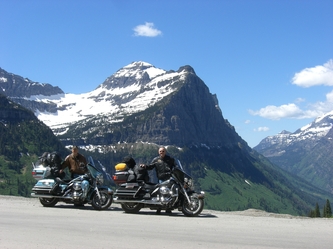 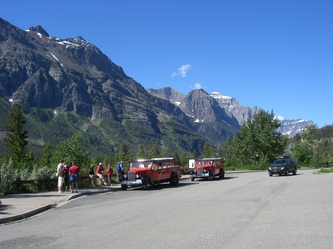 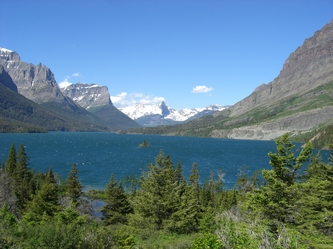 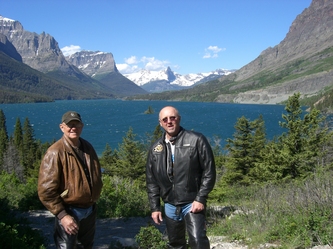 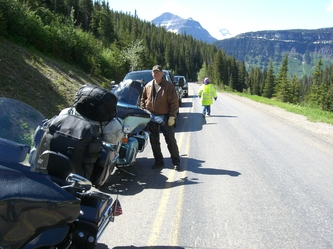 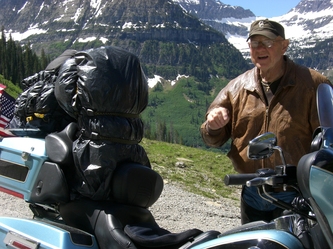 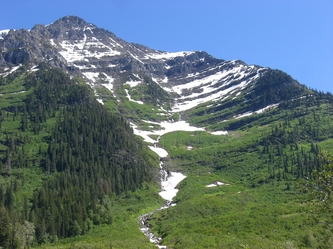 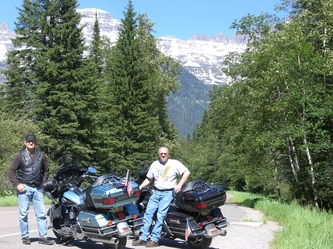 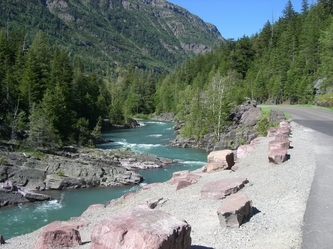 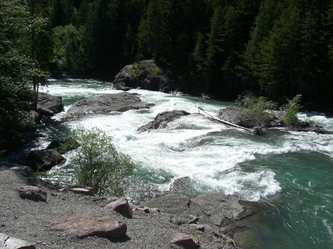 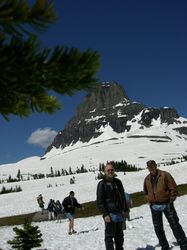 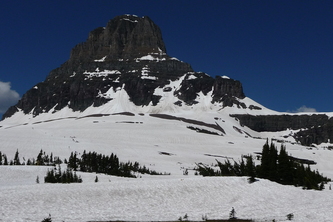 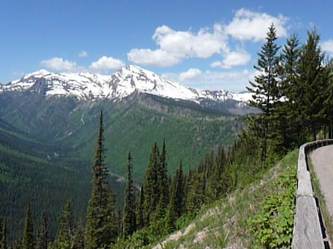 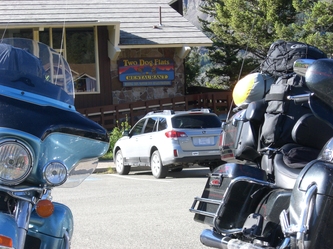 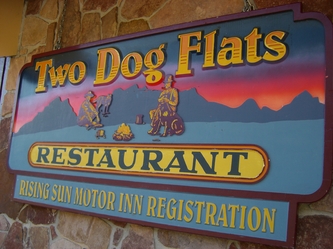 After packing up we headed directly to Kalispell for breakfast and a visit at the Kalispell Montana Harley Dealer  before heading north to Eureka, MT. 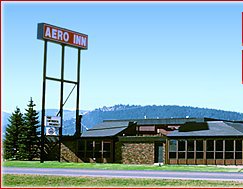 A Special Thanks to Taylor at the Aero Inn for allowing us to use their Wifi for today's web site update. The Aero Inn can be reached by calling 406-755-3798 or their web site: http://www.aeroinn.com/ 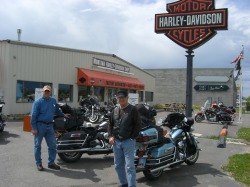 While Lee was updating updating the web site that morning Darrel was packaging up and shipping some items forward to Omak. WA. Too many items to carry into Canada!

Visited Montana Harley and purchase a couple of items.

That afternoon we rode 66 miles to Eureka, MT (2 miles south of the Canadian Border) and camped for two nights at the Blue Mountains Campground. 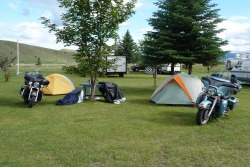 The Blue Mountains Campground was our home for two nights as we took some time to rest up and enjoy the local culture. Our time included visiting the local library (for WiFi), grocery store, and several saloons! The saloon in Eureka had great pool table. We used it extensively that day. That night we had dinner at a rustic saloon five miles out of town in the middle of nowhere. The bar was almost identical to the bar in the Erma Saloon in Cody, WY. The food was good and everyone was very friendly. The band was scheduled to start playing at 9:00 PM that evening, but we decided to head back to the campground, get a good nights rest and head out early to Baniff Provincial Park. 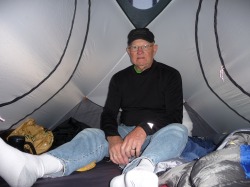 It was an early start that morning for a 245 miles ride to Baniff. Oops, took a wrong turn out of Cranbrook, BC, and continued to ride for 46 miles before discovering our error. The ride turned out to be beautiful, both ways!
Then leaving Cranbrook again we headed to Lake Louise campground for a second time and arrived around 5:30 PM. Tents up and headed for dinner and three more games of pool. No rain that day. In bed by 10:15 PM.