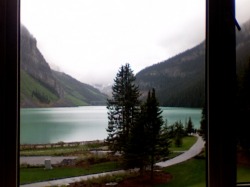 Light sprinkles this morning as we headed to Lake Louise from our camp site in near Lake Louise. We have a beautiful view of Lake Louise from the the Fairmont Hotel.
The clouds over the mountain peaks that surround Lake Louise and we are hoping it will clear before the end of the day. Tomorrow's forecast is "rain." 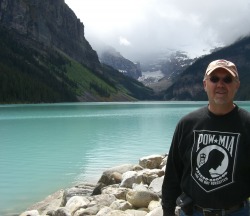 Happy Fourth of July. The Canadians showed no evidence of celebrating our US holiday, but the lady at the visitor information booth greeted us with "Happy Independence Day." That was kind of cool.
Our day started with rain. "No problem" we are learning how to deal with it. It started sprinkling aroudn 7:30 that morning so we decide to sleep in until 9:30.
Later that morning we had a breakfast sandwich and apple fritter at the Lake Louise deli. The rain had stopped and the sky showed evidence of clearing, so we rode up to the Fairmont Chateau and Lake Louise. It doesn't appear that the sky will cear for a couple of days. Rain is again forecasted for tomorrow.
That area around Lake Louise is beautiful with mountains rising up on three sides of the lake. The Fairmont Chateau overlooks the lake and the mountains from the fourth side of Lake Louise. People are canoeing on the lake and one canoe displays the American Flag as it skims across the surface on an almost perfectly flat water surface. The water has a blue green color that is typical of recently melted glacial snow water. 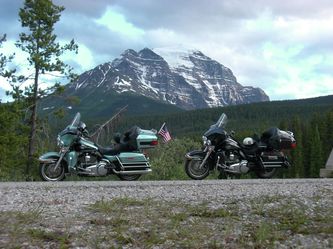 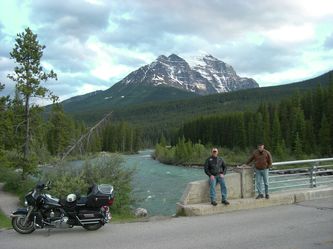 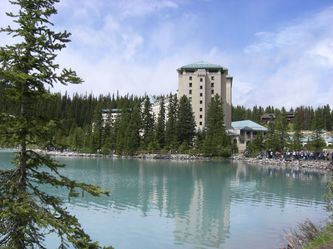 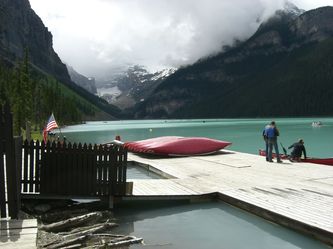 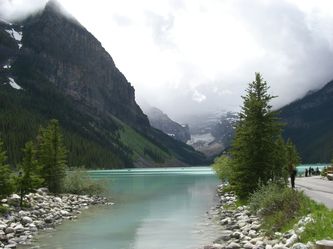 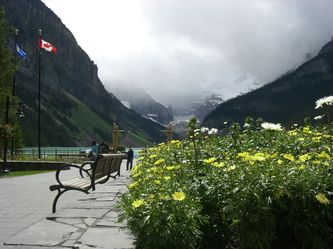 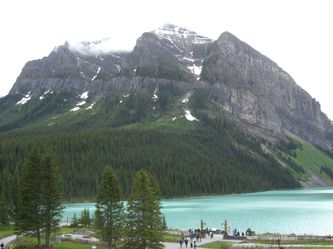 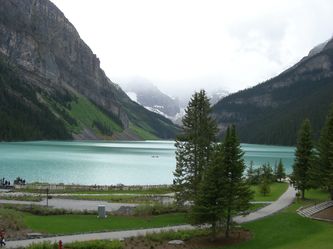 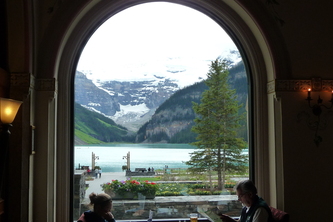 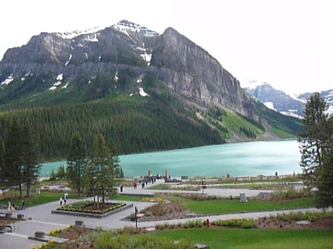 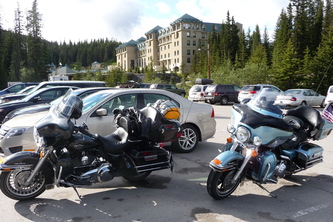 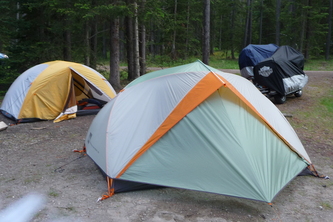 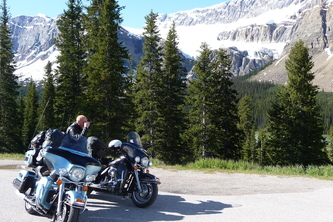 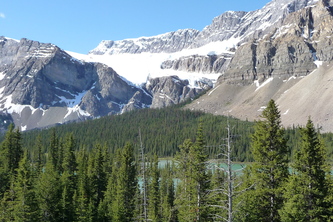 Carolyn with family in KC 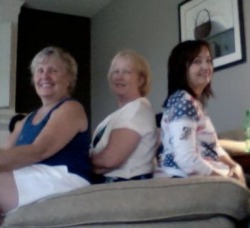 With Lee out of town Carolyn joined her family in Kansas City for the 4th. From left to right - Marg, Chris & Carolyn 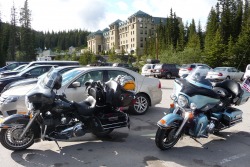 This will be our third night at Lake Louise. Weather has been a bit rainy off and on and it just made sense to stay at the same campground another day. We headed to Mt Revelstoke National Park via highway 1 that runs through Yoho National Park and Glacier National Park. We were within 30 miles of Mt Revelstoke when it started raining so we turned around and headed back. It was a great ride that paralleled Kicking Horse Creek and the Canadian Pacific Railroad. We stopped briefly at the Spiral Tunnel. The train wasn't coming through at the time, but here's someone else's video of this very interesting site. Clicking Here will take you to YouTube and a video of the Canadian Pacific train. 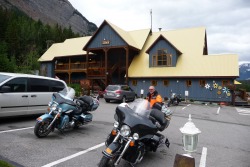 We stopped for breakfast at Field, BC, Canada, at the Truffle Pigs Lodge. After looking over the menu we decided on a strawberry muffin and coffee. That strawberry muffin was really good!
Lunch for the day was at Tim Hortons. They make the best "Maple Donuts" and sandwiches. Next time you travel to Canada make it a point to stop at a Tim Hortons 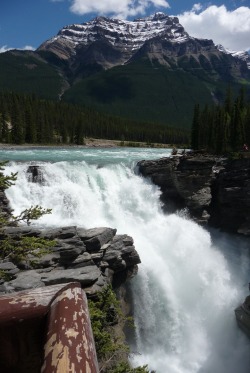 Beautiful riding weather and beautiful scenery. Athabasca Falls is one of the more power falls in the Rockies. The large quantity of water flowing over the falls has cut deep into the softer limestone beneath, carving intricate features, including potholes and a short canyon. 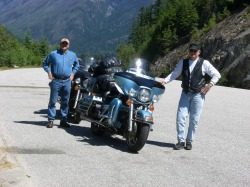 The ride from Jasper National Park to Kamloops was very warm. Tomorrow is our last day in Canada. The sights and experiences in Canada were definitely worth the trip across the boarder. The cost to eat, travel and stay in Canada is much higher than in the states. The extra cost of gasoline and food were the most noticeable. We camped in the Provincial and National Parks whenever possible. All the Canadian roads we traveled were very good. There was some occassional road construction, but it had very little effect on the enjoyment of our ride.
On to Omak, WA, USA tomorrow! 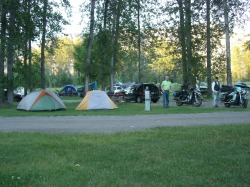 We had a short wait getting over the Canadian/USA boarder and rode on to Omak, WA, USA. It was a warm ride, but it sure felt good to be back in the United States. We camped for the night at River Bend Campground near Twisp, WA, a short ride into the Cascade Mountains.  The town of Whisp was one of many along the route through the Cascades. 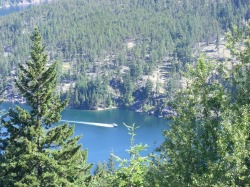 We crossed over the Cascade Mountains today and rode on to Olympia, WA. The Cascade Mountains were quite amazing. Curving and twisting roads along rushing rivers, beautiful valleys flanked by snow covered mountain peaks and large lakes of clear blue water.  We stopped in Alderwood, WA, to pick up some items at REI and then headed south on Interstate Highway 5 to Olympia. The interstate quickly became a slow moving parking lot as it approach 3:30 pm Friday afternoon (rush hour)!

Rich took us on a tour of Ft Lewis where he works. We also watched a Chinoock helicopter working through some flight tests at the airfield. We were not able to see the Kiowa helicopters that Rich flies on this visit. Maybe next time.

The Pictures below were taken while we stayed with Rich Alberts in Olympia, WA. 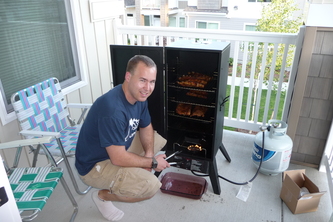 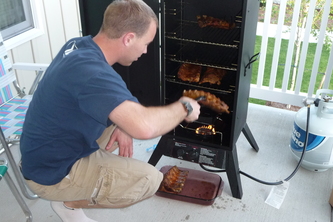 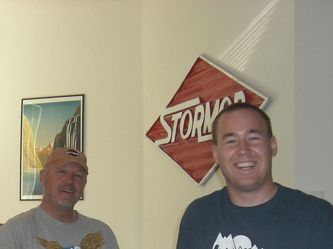 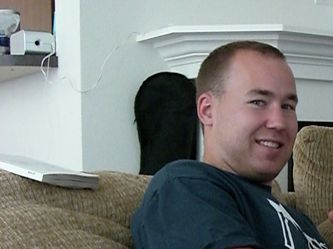 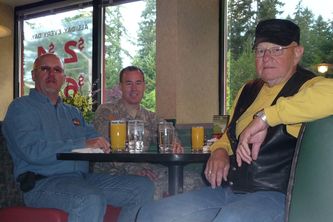 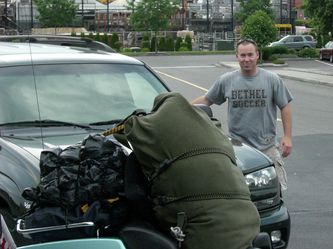 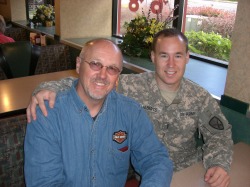 The phrase "Timimg is Everything" had special meaning for Rich & Lee. Rich's schedule changed and we were able to spend four days just hanging out and enjoying the time together. Breakfast at Denny's was one of those events.